The sky and the gods are ordained by Indra, celestial divinity, whose peace has been disturbed during the destruction of his palace on Mount Maru by a clumsy lizard. The world balance of power is so broken that it will require divine breath to find its equilibrium. 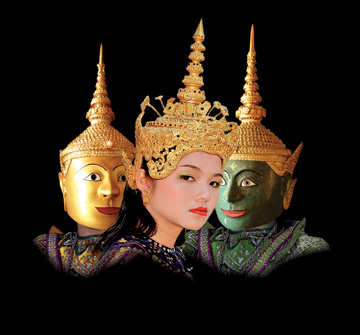 Phralak Phralam has to be understood as a fantastic story involving a multitude of divine characters. This dreamlike epic of Indian origin tells the story of Prince Phra Lam (Rama) and of the infinite love he shares with attractive Princess Sida (Sita). Regrettably this love is disturbed by the jealousy of Totsakhan (Ravana) who, using skilful subterfuge, kidnaps the Princess and takes her to Lanka Island, the island of the giants (Niaks, Rākshasa).  Jatayu the vulture king, son of Garuda, brings the proof of this kidnapping to Phra Lam by showing him Sida’s ring lost during her flight to Lanka. On this quest for Phra Lak’s lost love, his brother Lakshmani accompanies him, helped by the army of the monkeys under the command of Hanuman and his generals. After a long and hard battle over the sea, the miserable King of Lanka is killed and his army of giants decimated. On returning to the princely palace, after the jubilation of celebrations, Phra Lam momentarily doubts the real loyalty of Sida during this long stay with her supposed enemy. Sida proves her innocence by submitting herself to an ordeal by fire. And all ends in order and peace.