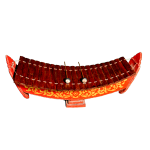 From the idiophones family and lamellophones class, this xylophone, made with small wooden strips, can be found in diverse shapes throughout Southeast Asia, where it originated. In this shape, we find it played in Thailand and Cambodia. The instrument measures approximately 1.20 m in length. The shape of the body echoes the hull of a ship. Fixed on a square base, it contains at each end two pointed wooden panels. Each side hooks a rope which carries a set of 21 blades of rosewood "may ching chan", about 38 cm long by 5 cm wide and 1.5 cm in thickness. The ends of these blades are drilled by two small holes which weaves the rope to maintain all the blades in position. The precise tuning of the blades is made by the application of bees-wax on their undersides. They are struck by means of fine-handled mallets and at the extremities, are threaded the rings of untanned skin, woven with raw silk thread and sheathed by a small strip of thick leather.

Also called ranat houm, the nangnat houm is another xylophone, with a lower tuning than nangnat hey. Made with thicker wood, the box is bigger, and the base wider. There are only sixteen wooden strips. For aesthetic reasons, the width of the instrument has to be the same as nangnat he. It has the same tuning, but a lower octave.

The pat kong, commonly known as khong wong is made by a set of sixteen small bronze gongs, suspended horizontally on a circular rattan structure. We can see some variants across South-East Asia, including in Myanmar and Vietnam. Struck by mallets similar to those of the nangnat hey, the gongs range in diameter which varies from approximately 17 to 20 cm, and their tuning corresponds to the wooden bars of the nang na hey. The musician sits down inside the circular armature to play it; the lowest toned gongs are situated on his left and the highest toned on his right. Within the pinphat, the pat kong can improvise at leisure on the melodies of the nangnat hey.

Of Khmer origin, the kong that is made of a pair of barrel drums, by two membranes near 80 cm in diameter stretched in skin of tanned buffalo, nailed at the edge. Because of their thickness and of the low rate of humidity, the skins stretch only a little. Both drums are maintained tilted on wooden frames, to allow the musician to play sitting down without raising his arms too much. Two big sticks made of bamboo are used for the beat, bass and powerful, that can be heard from a long way away when the music is played outdoors. The place of kong that is essential in the pinphat with warlike character, particularly in Phralak Phralam musical scenes and specifically in the dance of Niaks (giants). 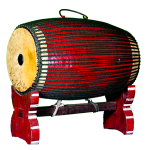 Similar to the Indian dholak, the that phon is a barrel drum with two ends, standing on a wooden base. We find it in the Lao, Thaï, and Khmer classical orchestras. It is intended to accompany the chant and the dance of Ramayana, where it is associated with the kong that. The beat is made with bare hands, the left for bass sounds and the right for treble. It is cut in a single hollowed piece of wood, slightly conical and convex. Two membranes of skin are stretched out on its ends by means of a double row of cords. Each skin is covered with black paste, made by flour mixed with coal-tar pitch, which modifies the timbre of the drum.

Very close to the Indian mangiras, the sing or xing are two small thick domed bronze cymbals. They are connected by a cord for a more effective connection. The opened and closed cymbals mark the tempo. The sing is high frequency, and has a powerful sound level. 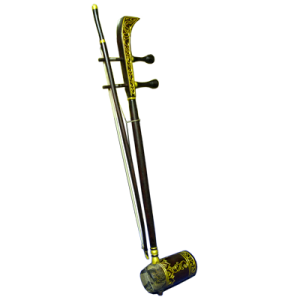 The soy e is a straight viol with two strings tuned in fifth. Its shape suggests Chinese or Mongolian origin. Its resonance chamber of decorated wood, is small and elongated, and its very thin sounding board, is 8 cm in diameter. The handle is cylindrical and its head stock is cut in the shape of a feather. The saddle is a simple ring fixed to the upper extremity of the neck. Both strings, now made of nylon, are rubbed by a curved bow with a horsehair lock insert between them. The soy e is played sat on the ground, placed on the thigh of the musician.

The soy o is another viol with two strings, similar to the soy e, but with a lower tone ("o" means "bass tune” while "e" means “high tune"). Differently to the soy e, its resonance chamber is a hollowed out coconut shell, crossed throughout by the neck, and its sounding board is made by a fine goatskin on which sits bridge made by a small white shell.